The year 2020, when we could go on the race course with a limited number of runners due to pandemic measures, brought new obstacles and, in a way, new opportunities for road runners. While many major marathons were canceled in the world in this process, we successfully ran the 2020 and 2021 Istanbul Half Marathon and 2020 N Kolay Istanbul Marathon, which we prepared with strict pandemic measures! We had a lot of learning from the event and start area to the race course. Accordingly, we had to decide renewing our 42K race course in N Kolay 42nd Istanbul Marathon, which we started with only 3000 marathon runners.

N Kolay 43. Istanbul Marathon will start in front of the 15 Temmuz Şehitler Bridge bus stop. The race, which starts about 250 meters before the toll booths, leaves Beşiktaş turn after crossing the bridge and descends to the beach from Barbaros Boulevard. By following this road, it enters the Galata Bridge by following the road of Dolmabahçe Caddesi, İnönü Stadium, Dolmabahçe Palace, Meclisi Mebusan Caddesi, Fındıklı, Tophane, Kemeraltı Street, Salı Pazarı, and Karaköy.

After Galata Bridge, it turns in the direction of Sirkeci and turns back in front of Hava Harp Okulu at the end of Sirkeci, Kennedy Street, Cankurtaran, Kumkapı, Yenikapı, Yedikule, Zeytinburnu, Bakırköy, Rauf Orbay Street following the coastal road. Following the same coastal road, the race enters through the gate of Sirkeci Gülhane Park. Passing through Gülhane Park, the race goes to Sultanahmet Square via the tramway road. Finish line is in the “At Square”, the meeting and sports center of the Roman, Byzantine and Ottoman Empires, between the entrance gate of the Blue Mosque and the Egyptian Obelisk.

The 15K race starts at 9.15 a.m.; after crossing the bridge, the course descends to Beşiktaş through Barbaros Boulevard and it reaches Karaköy following the coastal road.

The course turns in the direction of Sirkeci after the Galata Bridge and turns back in front of Hava Harp Okulu at the end of the road passing Sirkeci, Kennedy Street, Cankurtaran and  Kumkapı. The course which lies along the coastal road ends on the opposite street of the Yenikapı Meeting Area, right after the subway. 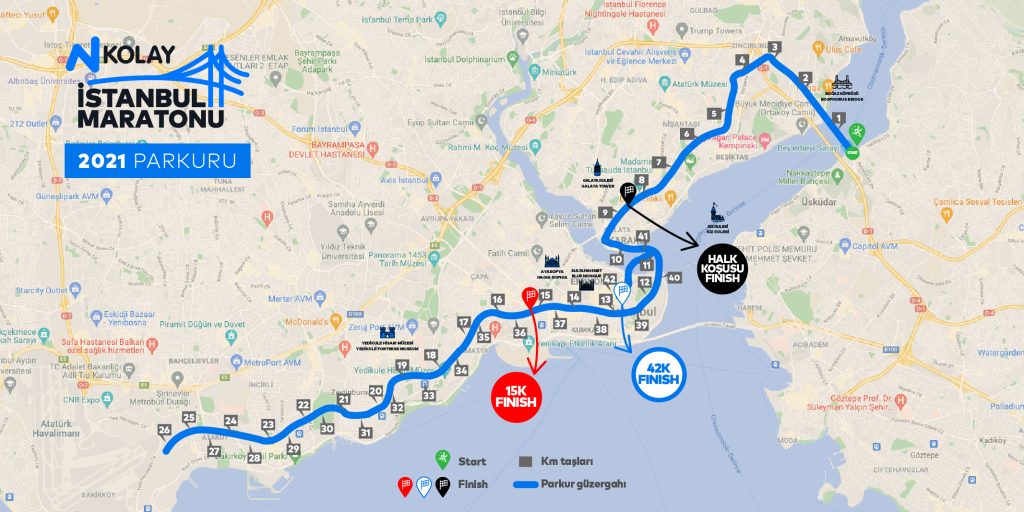